Topa-Top.com
0
Product was successfully added to your cart

Thinking beyond the front pack: considerations in choosing a baby carrier

07.03.2019
admin
babywearing
No Comments on Thinking beyond the front pack: considerations in choosing a baby carrier

Note: This post was originally posted years ago using the “crotch dangler” language which I have since come to understand is derisive …thus the edited title and URL. We all grow and learn!! “Narrow Based Carrier” or “Front Pack” are more appropriate terms for this carrier type.

It’s no secret that I love babywearing…but hate one of the most widely available carriers on the market…the Baby Bjorn. Ok, maybe “hate” is a tad strong – I’m always happy to see babies being worn and these carriers have introduced many a family to babywearing – but I do strongly dislike that the Bjorn (and it’s counterparts from Snuggli and Infantino) are so darn popular when there are much better options out there. The reason for their popularity is easy to understand. These are large companies with the money to advertise and the ability to mass produce. Fortunately, quality carrier companies such as Ergo, Beco, and Moby (among others) are beginning to make inroads into big box retailers and into mass market magazines. 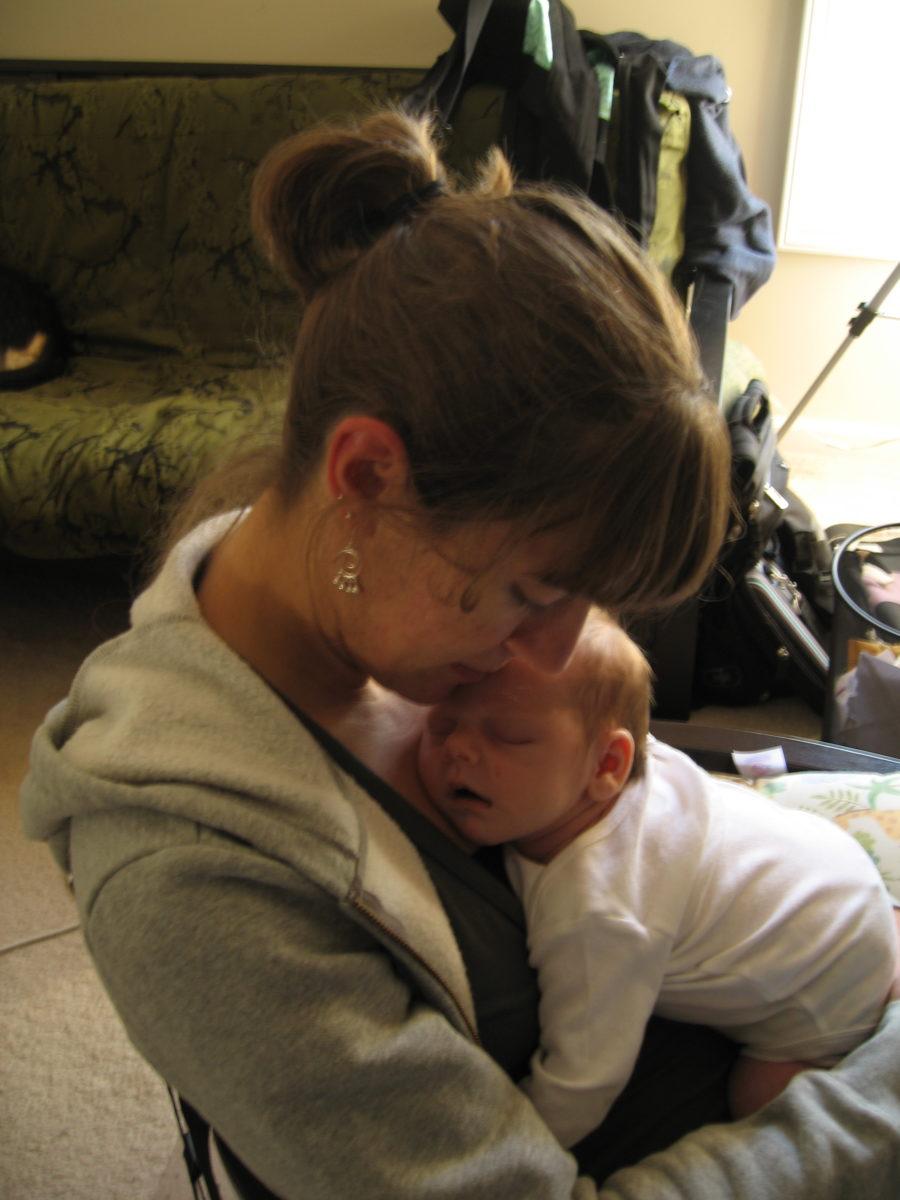 A good baby carrier should mimic the way we hold our babies in arms and the way our babies position themselves when held. When you hold a newborn, he will automatically draw up his legs into the “froggy” position with his knees apart. The holder instinctively places her hand under baby’s bum and holds baby at a height where the top of his head is easily kissed. An older child will automatically bring his legs up around the holder’s waist so that his knees end up slightly higher than his bum. Pick up your child and try it for yourself.

In order to mimic this natural holding position, a carrier must support baby out to the knees (as in the carrier comes all the way out to baby’s knees) and should place the knees slightly higher than the bum. A newborn is most often worn “legs in” so that he can froggy his legs up as he would when you hold him (different carrier types will allow for “legs out” at different ages).

Carriers like the Bjorn, Snuggli and Infantino SSC have earned the un-savory nickname “crotch-danglers” because they don’t position baby in the natural holding position. Instead, baby is seated in a fairly narrow seat leaving the legs to dangle straight down.

There is considerable debate, even in among seasoned babywearers, as to whether or not this “crotch-dangle” position is truly bad for babies. Sadly, there has been little scientific work done outside of the babywearing industry to support claims on either side – hopefully the ever increasing popularity of babywearing will spur more investigation. But consider that most pediatricians and child development experts advise limiting the amount of time a baby spends in devices such as an exersaucer or jumperoo in part because the position (very similar to a “crotch-dangle”) is not believed to be good for baby’s developing hips and spine if baby is left in that position extensively. So while a Bjorn is most likely not going to harm baby when used causally on a trip to the store, it’s probably not the best choice for the extended wearing (multiple hours a day) that many parents find themselves doing during baby’s early months.

I’d also argue that the “crotch-dangle” position is simple not comfortable for baby (and somewhat different in a carrier where baby can’t rest his feet vs. an exersaucer or jumperoo where his feet touch the floor). Try this simple test taken from Didymos’ instruction booklet: Stand on one leg with your other leg out in front of you, bent at the knee. Place your hands under your knee to support your leg and let the full weight of your leg rest into your hands. Now move your hands back towards your bum. You will instantly begin to feel a strain in your back that wasn’t there when your leg was supported under the knee. That’s the same strain a baby will feel when his legs aren’t supported to the knee. Even if we assume that this position doesn’t cause harm, it certainly isn’t as comfortable as the alternative. 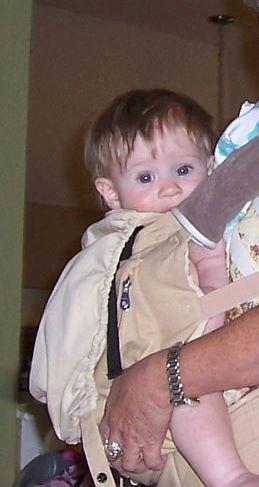 6 month old Gavin in the Ergo

In all fairness, I should mention that the recently released Bjorn Comfort Carrier does offer a “wide leg” position that does a better job of correctly supporting baby. But since it still offers the “normal” (their words) leg position, doesn’t offer a back carry, and is priced higher than better quality carriers – it’s still a “skip it” in my book.

When choosing a baby carrier, parents should consider the support and comfort the carrier will offer the baby and whether or not it can truly mimic the “in arms” position that it should.

If you are going to be wearing your baby for any length of time, you want to be comfortable. This becomes increasingly important as baby gets heavier. Many parents enjoy wearing for the first few months but find it becomes uncomfortable past 15 or 20 pounds. The problem is more likely that the carrier being used doesn’t offer proper support for the wearer than it is that the wearer is simply too weak to carry the child. If you can hold your baby in arms, you can wear him even more comfortably with the right carrier.

The Bjorn and company are notorious for carriers that are back killers for the wearer – they offer little in the way of waist support or proper back support (again the new Bjorn Comfort attempts to remedy this with a waist belt but there are still better options for comparable prices). For a small baby, this is likely a non-issue. But the Bjorn (classic version) claims to be usable for up to a 25 pound child. I’m sure the carrier can support that weight safely, but most wearers will feel quite a bit of back strain well before that limit is reached. Additionally, the outward facing position that is the trademark of these carriers puts additional strain on the wearer’s back as it places baby’s weight further from the wearer’s center of gravity. For a heavier child, a back carry is a much better option (more on that in a minute), but these carriers don’t allow for a back carry.

The Bjorn Classic retails for $63 on Amazon – pretty cheap for a baby carrier. But for only $40 more, you can get the standard Ergo which has a 40 pound (vs. 25 pound) weight limit, FAR better support for the wearer, ergonomic positioning for baby, and it does a back carry. The Ergo will last most wearers into toddlerhood; can’t say that for the Bjorn. The Beco Baby Gemini which offers a correctly supported forward facing position in addition to front and back carries starts at $130. The Beco is good for up to 35 pounds and offers correct support for baby and wearer. The Bjorn Comfort, which offers no back carry, retails for a whopping $171 on Amazon – clearly not the best deal in town.

But My Baby Only Likes the Forward Facing Position!!

This is a common concern for many parents interested in babywearing, but I don’t think it’s a good reason to buy a carrier that doesn’t offer the right support for you or baby. There are better options. 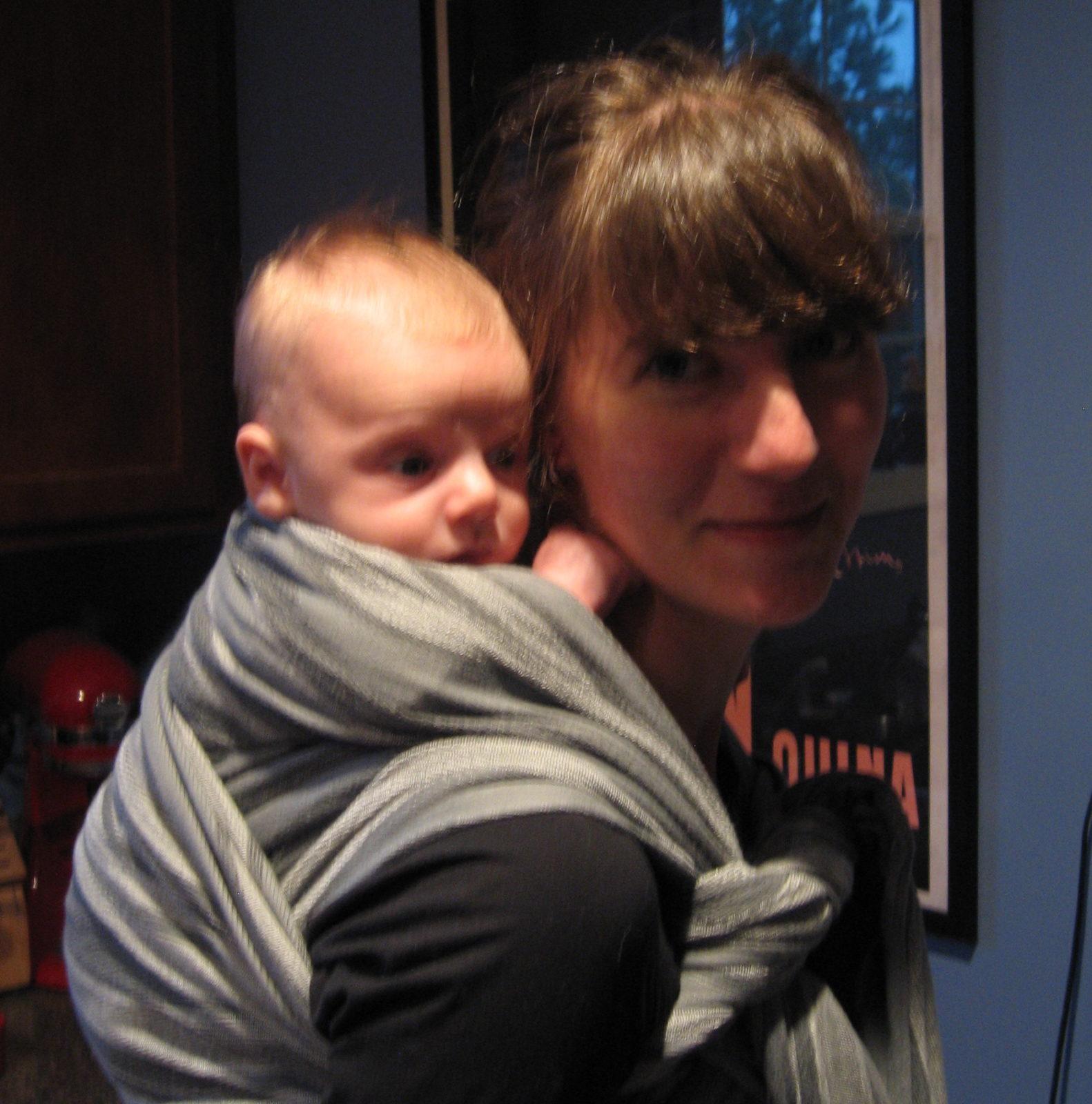 Will baby know what he’s missing? Maybe not. A large number of babies are perfectly happy to remain in the wearer facing front carry position; as they gain head control, they are able to look around despite “facing” in. There are also some good arguments against the use of forward facing positions. I’m personally not a fan because they don’t allow baby to rest his head when he’s tired or to escape over-stimulation. Others are less convinced by those reasons and feel that forward facing carries are fine in moderation (but please don’t leave a sleeping baby in a forward facing carry!). If nothing else, it’s indisputable that a forward facing carry, especially with a heavier baby, puts additional strain on the wearer’s back – so even if baby loves it, you may not.

There are certainly babies that aren’t satisfied to be worn facing mama. But there is an alternative. A high back carry gives baby the same view but allows him to still rest and “escape” stimulation as needed. It’s also much easier on the wearer’s back. To do a high back carry, you’ll need a woven wrap or mei tai; buckle carriers (like the previously mentioned Ergo and Beco) are typically worn lower on the back and can’t be used for back carries in the early months. Back carries are not only more comfortable, they also allow even more “hands-freeness” for the wearer, which can come in handy when you are say chasing a toddler around.

If you really are set on having a forward facing option with your carrier, the new Beco Baby Gemini is worth a look. It does allow forward facing, but positions baby in a more ergonomic position. It’s also a better value than the Bjorn as it has a higher weight limit, can be used for a back carry, and is more comfortable for the wearer. Another quality carrier with a forward facing option is the Catbird Baby Pikkolo.

Choosing a baby carrier should get just as much consideration as any other baby gear purchase you make. Our guide has information on the different types of carriers as well as brands and places to shop beyond those mentioned here. Many carriers are produced on relatively small scales and aren’t widely advertised, so you aren’t likely to find them at your local big box retailer. But there are tons of great options beyond those you typically find at the big box stores, options that will provide better long term value and comfort for you and your baby.